Off The Shelf… Grief Is The Thing with Feathers: Max Porter (2015) 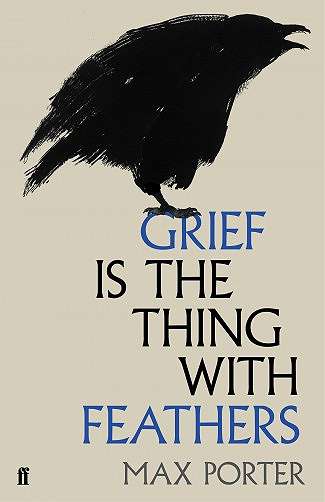 Grief is the Thing with Feathers has been on the shelf for a while. I took it away with me when I went away for a short silent retreat (the one where I have no company to talk with). I loved this book and read it on the first morning in a few hours.

The book has three characters Dad, Boys, Crow, and each have a voice.

Dad was visited one day by Crow after the recent sudden death of his wife. Dad was in his own grief, as were Boys.

Four or five nights after she died, Dad is reflecting on the “organisational fakery of my days” … feeling “hung-empty.” “Being at the epicentre grants a curiously anthropological awareness of everybody else… I felt it would be years before the knotted-strong dream of other people’s performances of woe for my dead wife would thin enough for me to sense any black space again… I thought in support of myself, everything has changed, and she is gone, and I can think what I like.” Dad was about to be visited by Crow “I won’t leave until you don’t need me anymore. “

The story reflects on grief, returning to work, changes in the family dynamic as new roles are learnt, and how vulnerabilities connect the characters to one another. The story was a compelling read as each of the characters turned in to their behaviour in the aftermath of the death and to their relationship with the other.

A touching moment in the story was a letter from Dad to Dearest Boy when he signed off the ending “Are you being good? Don’t worry about doing stuff or not doing stuff, it doesn’t matter.” This seems to address the issues around the behaviour as the boys wanted to remember their mother. The boys reflections on deliberate behaviour that evoked a reaction from their father, that was as it was when their mother was alive, “defined by it, sizeable chunks of cracking on, then greater sink-holes of melancholy.” The deep yearning and searching, ageing her, wondering if they would die the same age as her, they wondered “we hope she likes us.”

Dad addresses the common desire from others to “move on.” “Moving on as a concept, is for stupid people, because any sensible person knows grief is a long-term project. I refuse to rush. The pain that is thrust upon us let no man slow or speed or fix.”

There is much to love about this book of poem and prose of the three characters Dad, Boys, Crow and of the transition of raw acute grief to the acceptance of the grief as enduring part of the being, after loss of a significant person and relationship. It has a balance of raw vulnerability and humour.

I read this book without the raw grief that Dad was experiencing. I was a widow over 26 years ago and without children at the time. However, when reading the book I could recall the sense of being in my body during acute grief and not fitting into the world of normal activities coming and going. The Dad role was very powerful for me and the character that drew me into the story. I also read this book through a grief informed lens as a bereavement counsellor. It is a book set in London and may have a familiarity and identification with location setting for those living there or who have visited.

Ready to take the first step?